Monitoring studies, in general, are crucial for detecting changes in a timely manner and effective management of ecosystems if need be. Long-term ecological monitoring is important for detecting changes in ecosystems and to understand the drivers of these changes. Climatic events that occur over long timescales such as increasing global temperatures, changes in seasonality, changing land-use and habitat loss have affected biodiversity globally. Long-term studies can help effectively evaluate the effects of such changes on biodiversity.
Birds are an important indicator taxa for monitoring ecosystem health. They are ubiquitous, easily detectable, and easy to monitor as compared to some other taxa. India has an enthusiastic population of bird watchers that contribute bird data regularly to citizen science platforms like ebird. However, this data is largely based on semi-structured methods like timed checklists. There is a lack of a formal nationwide program for monitoring of birds across India although there are groups working on bird monitoring scattered across the country. Additionally, we also have several citizen scientist groups that have been monitoring birds in their cities and neighbourhoods. With the goal of bringing together all these groups with a common interest in bird monitoring, the bird theme of the India – Long Term Ecological Observatories Program partnered with CEDAR, Bird Count India, and Nature Conservation Foundation to arrange a symposium on bird monitoring.

The symposium was a two-day virtual event hosted on a combination of Slack, Zoom and live-streamed on youtube. There were 19 invited talks and 16 contributed posters at the symposium with a discussion on “Future of bird monitoring in India” on the last day – open to all participants. 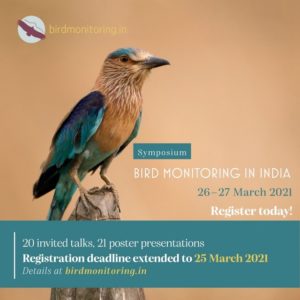 The symposium received an overwhelming 422 registrations before the closing date. About 241 participants logged into the Slack workspace during the event and we had about 135 active members who posted and exchanged messages on Slack.

The symposium aimed at hosting talks and posters based on different topics related to long term monitoring. The goal was also to get a brief and quick introduction to the different monitoring efforts in the country. The talks were therefore limited to 10 minutes for the presentation and 5 minutes for live-interaction with the speaker. The poster presenters were free to use a format of their choice for the presentation – a short video/ a static poster. The discussion on these posters were over slack in a text based format. The data-driven presentations were mainly aimed to highlight 1. Historical datasets and 2. Ongoing long-term monitoring efforts (with long term being defined as > 5 years). The other talks were related to the importance of long-term studies on bird populations and new and upcoming projects.
The symposium started off with a presentation by Dr Taej Mundkur from Wetland Internationals who gave an overview of the importance of long term monitoring of birds in conserving flyways of migratory species. Following this introduction, we got a snapshot of the results from a survey on long-term bird monitoring efforts across the country from Tarun Menon which included the number of efforts, the habitats that they are conducted in, study species, the duration of the study, and whether or not they are able to sustain the long-term efforts. These talks set the stage for the symposium creating a relevant background for the data driven talks in the next day and a half.

Over the course of the symposium, we had interesting historical datasets from the Western Himalayas; and Mizoram and the Anamalais presented by Tony Gaston and T R Shankar Raman. The Western Himalayan monitoring study presented data from the 1960’s and from the late 2000’s in combination with data from ebird to reveal changes in bird populations. The studies in Mizoram and Anamalai’s were conducted two decades apart in each landscape using the same methods. This study highlighted the importance of consistent methods and monitoring efforts such as these using space for time substitution in habitat disturbance gradients.

Screenshot from a talk on Day 1 that presented historical data

In addition to these primary datasets, the State of India’s Birds (SOIB) group made a presentation about the main finding of the report that was published in 2020. This report is entirely based on citizen science data that is contributed to the ebird platform by researchers, birdwatchers, nature clubs and birding groups over the last few decades. Some researchers and birders have dug into their field notebooks from several years ago to contribute to this platform and the SOIB talk highlighted the importance of semi structured methods of monitoring and demonstrated what outputs from such work can help arrive at. Trevor Price presented work from the Himalayas, Eastern Ghats of Andra Pradesh and Mahabaleshwar in Maharashtra which offer a rich historical dataset collected using different techniques for monitoring including line transects, mist-netting and breeding bird surveys.

Multiple groups of researchers presented data from monitoring single species. Aparajita Dutta presented insights from their long term work on Hornbill nesting in Pakke in the northeast linking it to climatic events such as the El Nino. The other single species work represented at the symposium was the study of the ecology of the endangered Forest Owlet in Central India presented by Prachi Mehta. This study presented several aspects of the species ecology that was studied for over a decade including abundance estimates, population genetics and movement ecology. 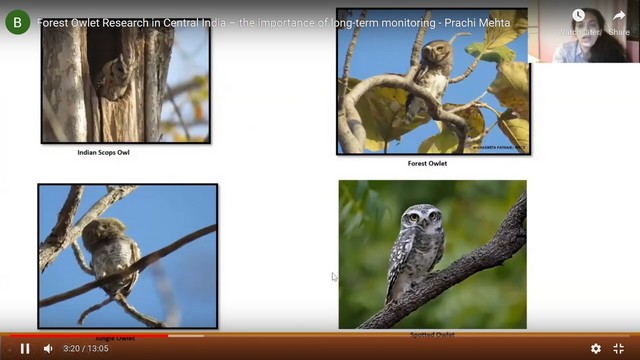 Parveen Shaikh from the Bombay Natural History Society presented findings from their long term work on the endangered Indian Skimmer in the riverine habitats of Chambal in Madhya Pradesh reporting changes in population status and nesting success over the last few years.

Several groups presented their long term effort on bird communities. Kulbhushansingh Suryawanshi spoke about the work carried out at a field site in Spiti Valley, Himachal Pradesh. The effort is in it’s teen-years and the presentation demonstrated some cyclical patterns in bird species abundances from their study site and some reflections on their learnings from setting up a long-term monitoring program, what they could have done differently – accounting for transitions of people being one of these factors. In Kannur district of Kerala, the Malabar Natural History Society has been conducting bird surveys at the Aralam Wildlife Sanctuary with help from the Forest Department. C Sashikumar spoke about this work at the symposium presenting data from 19 years of surveys that started in the year 2000. Umesh Srinivasan’s work from the Eastern Himalayas highlighted the importance of detailed demographic studies that can help arrive at the underlying causes of population changes of different birds in the area. By using mist-netting techniques, they have been able to closely examine the survival and reproduction over 8 years in the Eaglenest wildlife sanctuary in logged and primary forests with an elevational gradient.

Some teams also presented long-term work conducted on birds belonging to specific groups eg. wetland birds and raptors. The work on bird assemblages at the Sultanpur jheel in Haryana was presented by Ghazala Shahabuddin from their 9 year dataset. This work highlighted the changes that the waterbody has undergone over the last decade and how changes in habitat structure may affect the wetland associated bird species in the area.
The Asian Waterbird Census is a citizen-run monitoring initiative operating since 1987. The Kole Wetland site was monitored by citizen scientists over the last three decades. P O Nameer presented population trends of waterbirds from this monitoring program. The Bombay Natural History Society has been monitoring wetlands of Tamil Nadu. S Bhalachandran spoke about the population trends of waders and ducks in these wetlands and range expansion and changes in migratory species. Another citizen-scientist group was represented by the Perur Lake forum group from Coimbatore. They monitored birds for over seven years at the lake and presented trends in common birds while also discussing threats to wetlands.

T Ganesh presented their work focussing on composition and age structure of three species of communal ground roosting Harriers. Farah Ishtiaq also presented their long-term work in the Western Himalayas on monitoring birds and their parasite diversity. Finally, the bird component of the goals and objectives of the India-LTEO program was introduced to the participants of the workshop through a short presentation.
All talks were pre recorded and played on youtube. Speakers were present live on zoom to answer questions posted on the Slack workspace posted by the participants and read out by a mediator for every session. The talks presented at the symposium are now available for viewing on the symposium website: https://www.birdmonitoring.in/invited-talks/.

The symposium also hosted a selected number of poster presentations. Posters were in different formats – JPG, PDFs and short videos. Although not all posters presented long term trends, the poster presenters were encouraged to present temporal trends for the data they had been collecting. 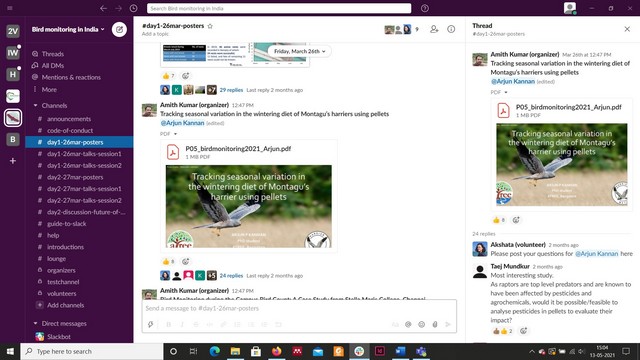 Poster presentations included different approaches for single species like the Grey Hornbills, Barn Swallows, vocalizations of Nightjars. Some citizen science monitoring efforts were represented by campus and neighbourhood bird monitoring programs from different parts of the country. We had a few posters representing studies on Urban Biodiversity from residential neighbourhoods in cities and educational campuses. Results from both structured and semi-structured methods of data collection were represented in the poster sessions. Although some of these studies were short duration studies, most of these studies have the potential to become long-term ecological studies given that they are able to sustain over time.

The poster session of the symposium brought forward that although there are several systematic and semi-structured studies on bird monitoring across the country, many of them are unable to survive over the long term. On the last day of the symposium, to address this gap, a discussion session focussing on the challenges and opportunities for bird monitoring in India in the future was organized. This was open to all registered participants and was conducted as a live Zoom session. Participants were divided into groups of 5- 6 and were put into breakout rooms for discussion ensuring that everyone gets a chance to speak. Every group was assigned one moderator. After the session, all groups met in the common Zoom session to discuss and summarize all the points that emerged from the discussion.

Participants at the discussion session on day 2

The key points that emerged out of this discussion were –

Through this symposium our goal was to bring citizen scientists, bird watchers, students and researchers together on one platform to learn about long-term bird monitoring projects in India. The symposium was also a starting point for a broader conversation about the future of bird monitoring in India. Through the action points that came out from the discussion on the last day, the goal is to set up working groups to address these issues that were raised and create a peer network to support each other in setting up and sustaining long-term bird monitoring projects. Based on the feedback received from the participants, we hope to continue to conduct this symposium and some workshops and training under the birdmonitoring.in banner in the future.

41 participants provided feedback in a form circulated at the end of the symposium. Majority of the survey participants said that they participated in the symposium to learn about other bird monitoring programs, learn about methods used and network with other people involved in bird monitoring. The symposium seemed to meet the participants’ expectation with respect to learning about other programs but not with respect to improving understanding of principles of monitoring or networking. Participants also expressed interest in such events being organized regularly in the future, once every 6 months / once a year.

Individual feedback from some participants also suggested that opportunistic and hobbyist bird-watching can be converted into systematic efforts and such events and networks will help channel these efforts. Such events also help publicize results from long term monitoring efforts and keep participants motivated. 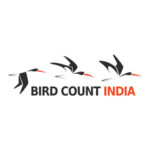 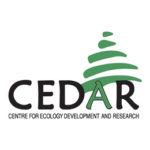 The above report can be downloaded from here.