Bird Monitoring Activities in India: Summary of results from a questionnaire survey

Bird research has a long and celebrated history in India, and is closely intertwined with the rise of ecological research in the country and in recent years, has been at the forefront of it. With the legacy left behind by Salim Ali and those inspired by him, bird research has taken off in India post-independence. Birds are loved by researchers and hobbyists alike, which has kindled an overall interest in nature and wildlife over the years. The popularity of bird watching as a hobby has been on the rise for the last 15 years and to tap into this trend, various citizen science initiatives have been launched, many of which have become immensely popular. We are also witnessing a simultaneous rise in systematic ecological research on birds spanning several species and habitats across the country. Bird research in India has focused on various aspects like behaviour, ecology and evolution, making birds one of the most well studied groups of animals in the country.

Many species of birds are quick to respond to changes in their environment. Birds are thus used as popular indicator species to infer ecosystem health for conservation decision making. Birds can be found in all types of habitats, ranging from urban and semi-urban to rural and agricultural landscapes, grasslands, wetlands and forests where they are known to provide critical ecosystem services such as seed dispersal and pollination. Monitoring bird populations can therefore tell us a great deal about the health of the ecosystem and the state of various ecosystem functions.

Understanding long-term bird trends in India is important as shown by the State of India’s Birds report, which is based on an analysis of information derived largely from casual birdwatching over years and decades. This report provides new insights on changes in bird populations in India, confirming known (or suspected) trends, and revealing population trends that were previously unknown. However, there are limitations to the use of non-systematic birdwatching data for assessing bird populations.

Systematic monitoring programs go beyond casual birdwatching reports to more consistent monitoring following standardized sampling protocols. Currently, relatively few such efforts exist across the country, and they have limited reach and visibility. In addition, there is little or no networking across groups that have developed long-term datasets often because they are not aware of similar monitoring efforts in the country. As a result, there is insufficient exchange of information and insights amongst researchers across the country. Going forward, there is a need to identify different long term bird monitoring efforts from India and encourage conversation and collaboration between the various parties involved.

With these thoughts in mind, a few like-minded scientists and birdwatchers with common goals and interests, got together and decided to frame a questionnaire survey so as to develop a database of long-term bird monitoring efforts across the country. This questionnaire survey was circulated on social media and email groups, and was kept open for about 2.5 months from 15th July 2019 to 1st October 2019. The summary of responses is compiled below –

We focused on asking basic questions related to the project like location, methods used, duration of the monitoring project and how long the effort has sustained. To get a better understanding of the project, the survey also included questions about number of species monitored and aspects related to bird monitoring that the project focused on eg. abundance, nesting behaviour, roost counts and so on. We made an effort to keep the survey short and concise for the initial round of investigation in order to encourage participation.

We received a total of 161 responses which came from 146 unique studies. Including amateurs and professionals, 114 bird researchers from 77 institutions responded to the survey with 31 responses from independent researchers. This demonstrates the interest and effort by the bird community from across the country in monitoring programs.

We then delved a bit deeper into the data to understand different aspects of the existing programs to identify gaps and problems faced by these researchers.

Length of the Studies

Most studies (60%, 88 out of a total of 146 studies) have monitored birds for under 5 years. A few studies (35 studies; 24%) have sustained for 5 to 10 years while the number of studies that spanned 10 to 20 years was 15 (10%), and only 8 studies (5%) have persisted for more than 20 years. Some of the studies that have existed for more than 10 years are historical snapshots of the bird communities (8 studies). In general, as it emerges from these responses, bird monitoring studies can be broadly classified into two kinds of studies – systematic yearly monitoring efforts with fixed protocol, and historical snapshots: systematic surveys done many years ago and have been repeated after a gap of a few years. Such studies may also be repeated using the same protocols in the future.

Are these studies continuing?

Many research studies exist for short durations – typically determined by student research projects, and availability of interest and funding to sustain the research. To understand this, we asked if the studies were still continuing. 75% of all the studies are continuing, and it is heartening to know that most of the short-term studies are expected to become long-term monitoring efforts in the future. All studies that have existed over 10 years are expected to continue monitoring the respective sites. 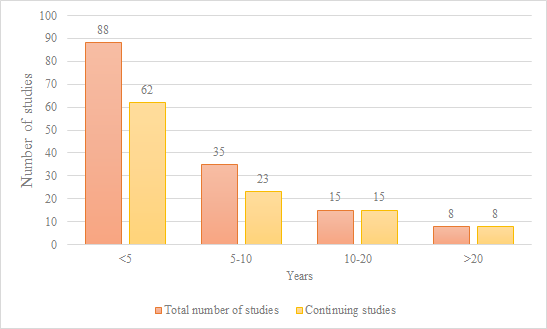 How many species were studied?

Some long-term studies focus on entire bird communities of the study area while some others may focus on a particular species or group of species. A total of 33 studies (23 %) focussed on a subset of species, 15 studies (10 %) focussed on a single species while 98 (67 %) studies assessed all species at a location.

Where are these studies happening?

The statewise summary of the number of studies provides a fair understanding of the geographical spread of these efforts across India. 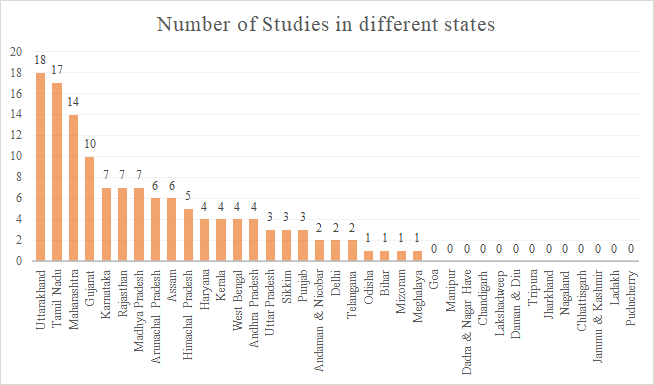 Number of studies from across the country 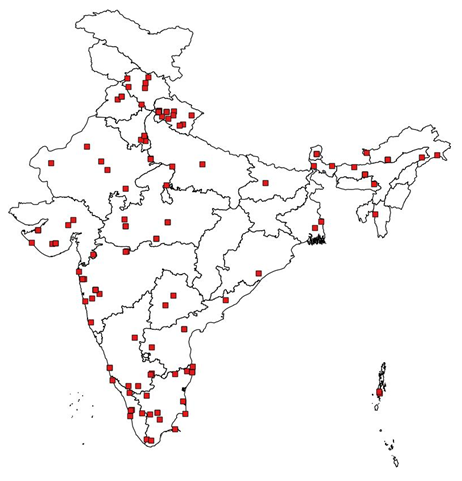 Distribution of study locations in the country

Habitats covered in these monitoring efforts

Most of the bird monitoring efforts in the country have been concentrated in forests, followed by water bodies, and urban areas. This points out the gap in long term monitoring studies in important open habitat ecosystems like agroecosystems, grasslands/scrublands, and deserts. 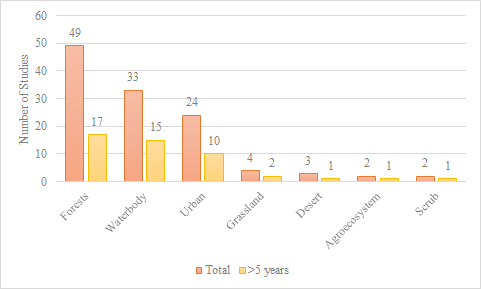 What do these Studies Monitor?

Most studies focused on monitoring the presence / absence and abundance of species. Other studies that focus on breeding, seasonality, behaviour etc are fewer in number. This may be due to the high effort involved in such efforts that is often difficult to sustain over a long duration. 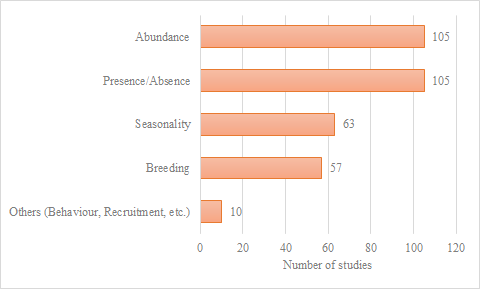 Among the studies that are a part of this survey, checklisting was the most commonly used method. Checklists are easy to use, quick, and can easily be implemented by multiple individuals thus making it robust to turnover of researchers. It is also a commonly used method in citizen science programs and therefore it is no surprise that it is one of the most popular methods. However, there are limitations on the kinds of analyses that can be attempted using checklist data. Next most commonly used methods were transects or trail walks, point counts and total counts. Ringing studies are by nature intensive and high effort so there are much fewer ringing studies in India – some of these have been operating for a long time (eg. BNHS) while others have been set up more recently. 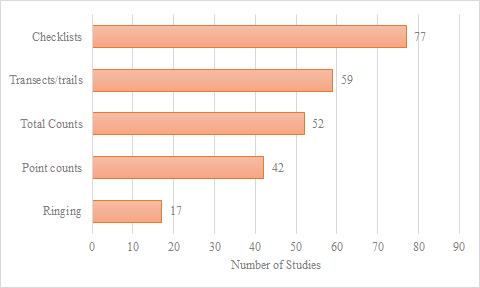 It is heartening to see the number of responses to a survey on bird monitoring studies from across the country. However it also reveals several gaps in our monitoring efforts. We see that many studies find it difficult to sustain beyond 5 to 10 years of monitoring. This could be owing to several factors including, lack of funding or institutional support to sustain the efforts and turnover in personnel involved. The survey also points to under-representation of habitats such as scrubland and grasslands in monitoring efforts. Similarly, agro-ecological systems and desert habitats are not well-studied in India. Further efforts need to be concentrated in these habitats while we continue existing efforts in other areas. Geographical gaps are seen in bird monitoring in Eastern and Central India. While forests are generally better monitored, a few areas are better represented than others such as the Western Ghats and Western Himalayas

Long-term ecological studies on birds have the potential to generate important insights into ecological processes at the population, community, and ecosystem levels and further understand how anthropogenic environmental change can affect these processes. For example, Peter and Rosemary Grant’s 40 year work on the Galapagos Finches provides a foundation to understand phenotypic change and evolution. Breeding bird surveys from across the world, like the North American Breeding Bird Survey and the Pan-European Common Bird Monitoring Scheme are successful bird population monitoring schemes that have generated data on long term changes in bird populations. These examples from around the world bring to light how essential long-term datasets are in the development of scientific principles and evidence-based management strategies.

There is growing interest in continuing these efforts and monitoring programs within India as well. Considering this interest in bird monitoring, it is then important to connect as a community to sustain these efforts across the country. As a first step to connecting with the community, a symposium, “Bird Monitoring in India” was organized in March 2021. The symposium brought together birdwatchers and scientists interested in learning from each other which stimulated various discussions related to the challenges and opportunities for long-term bird monitoring studies in India. The hope is to create a diverse community of people interested in monitoring birds thus encouraging communication and collaboration between stakeholders thus paving the way for sustainable long term bird monitoring efforts in India.